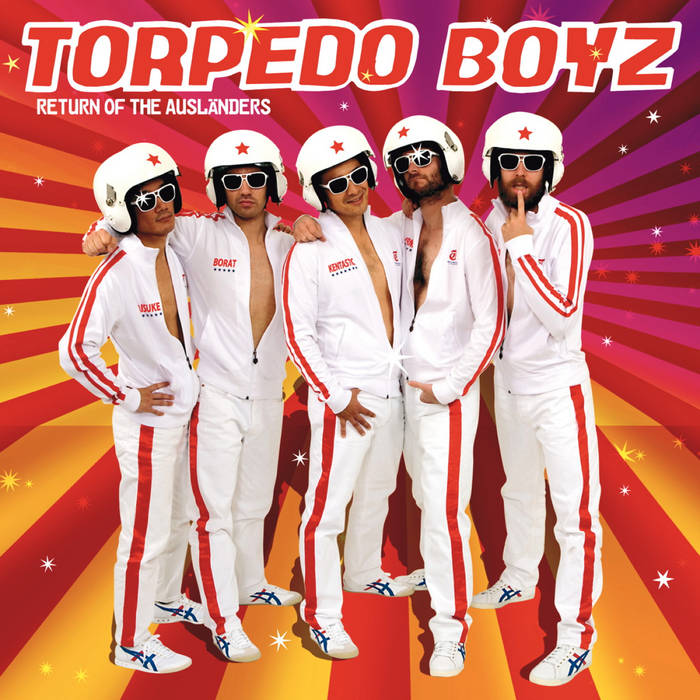 Just like the city’s legendary nightlife — where fresh ideas instantly become clubland reality and the scene maintains its edge with shape-shifting spontaneity — the Torpedo Boyz came into existence as a spark of an idea and, as their new album, Return of the Ausländers, shows, they continue to constantly evolve. But we’re getting ahead of ourselves. It all began back in 2004. That’s when Kentastic — a pop DJ who also fronted an indie band — and former house DJ Rollin Hand began screwing around with some beats during a recording session and came up with the rowdy, rambunctious “Gimme a Bassline!” Initially released as a one-off 12-inch, the track immediately struck a chord, quickly climbing into the Top Five of the German club charts. Soon after, New York’s Ursula 1000 included the track on his Ursadelica compilation, released by Thievery Corporation’s ESL label, and Puma snapped up the tune for a major TV campaign.

Suddenly everyone wanted a piece of the Torpedo Boyz: Washington DC’s Fort Knox Five volunteered to remix the next single. Then as the ideas and tracks continued to flow, artists from Smoove, Skeewiff, and the Pinker Tones to Cubismo Grafico and Groove Allegiance lined up to re-rub a series of hit 12-inch releases, including “Are You Talking To Me???”, “Japaneeze Boyz,” and “The Disco Song.” Still, as debut album Headache Music and the award-winning Cum On Feel the Boyz (both released on Lounge Records in Europe and Sounds From the Roof in the US) followed and demand for live appearances exploded, Kentastic and Rollin Hand decided they wouldn’t be happy performing as faceless knob-twiddlers. Instead, with vocalists Returner and Daisuke as well as with Kurtis Bo and Borat on bass and drums they gathered their merry gang of collaborators and formed a fully-fledged touring band. Why? There’s one constant with the Torpedo Boyz: Expect the unexpected.

Their musicianship, infectious energy, and zany outfits helped take what was already becoming a global phenomenon to the next level. In rejecting the rules of electronic-production-duo-by-the-numbers, the Boyz won over audiences everywhere they played, from Los Angeles to Canada’s Whistler to Moscow and back home in legendary Berlin venues like Tresor. Word of their incredible live show spread along with their tunes, and in 2009 the band was invited to tour Asia and Spain. Alongside these full-band gigs, Kentastic continued to spread the funk Torpedo style with DJ appearances, jetting around the world to spin in the UK and US, France, Israel, Portugal, Korea, China, Holland, Russia, Spain, Hungary, Japan, Ukraine, Slovakia, Poland, Canada, and all across Germany. Which finally brings us up to the present, and the Torpedo Boyz’ third LP, Return of the Ausländers. The title is a rye comment on the Boyz’ all-encompassing philosophy, with their lyrics in Japanese, English and German, and their musical miscegeny blurring borders between genres.

The new record once again defies expectations, bringing in new sounds—like Returner’s Krautrock influenced “Maschinenwelt” and Daisuke’s exposing “Ich bin Ausländer” (“I’m a Foreigner”). Davey Woodward from the Experimental Pop Band turns up on “That Is So Beautiful.” The tune “Your Input Is Not Correct!” includes a sample of a Moscow hotel’s automated wake-up call system recorded while out on tour; In “Fat Man’s Walk” Returner celebrates a liberating rejoinder to Randy Newman’s “Short People.” Sure, the Torpedo Boyz will always throw down plenty of danceable break beats, but their irrepressible sense of fun means you’ll also hear totally unexpected sounds — a nod to Kentastic’s indie pop background here, the jarring cut n’ paste mania of “Kokoro Ni Rock’n’Roll” there. In short, the new album is anything but a half-assed return to the well.

It’s an upbeat, breaktastic record ready to get the party started on your block—whether your block is in Brooklyn, Bristol, or Beijing.