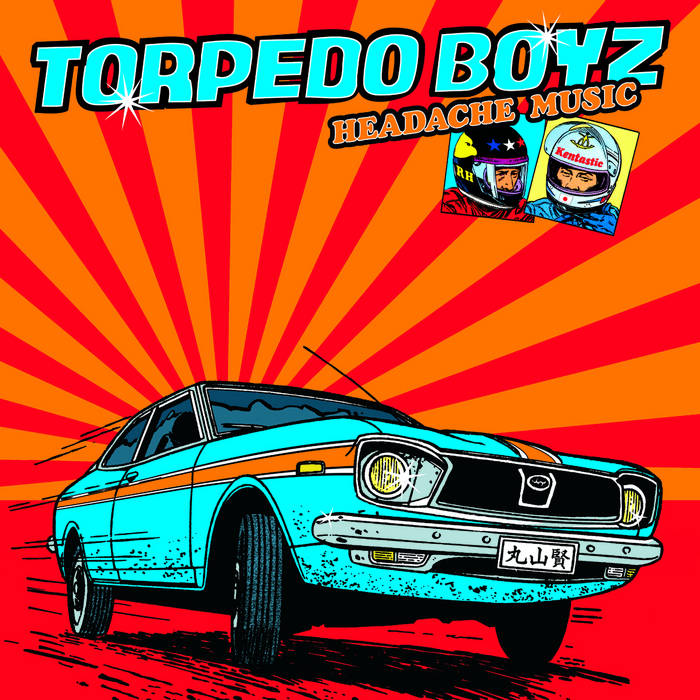 TORPEDO BOYZ got “Headache Music”. What’s going on in the heads of Kentastic and Rollin Hand, the DJs, producers extraordinaire from Berlin, Tokyo und Paris? „Are You Talking To Me ???“ and „Gimme A Bassline!“, the first two 12“ singles by the duo, are still on the playlists of many freestyle DJs around the world. But there’s more: The colourful UK-breakfast cereal „Cheerios“ chose „Abacus“ as the soundtrack for their new TV commercial. Kentastic has been touring the United States together with Ursula 1000 and recently took his records for some spinning DJ action around Japan. So it’s about time for „Headache Music“ now – an album full of fun, madness, genius rocking away on the fast lane.

Probably it is the crazy guests who make „Headache Music“ possible and had the TORPEDO BOYZ working their brains. Returner („A/C Guy“, „Are You Talking To Me???“ and „Start Being Nicer“) was discovered in a Cuban harbour bar by the Boyz. He was in process of winning a table-dance contest when Kentastic and Rollin Hand thought: “If someone is such a good dancer, he’s may well be a good rapper as well.” Fair enough. But Returnes originally is a shark hunter …

Serge Kool (“Au Jour Et A L’Heure”) was born in France and plays with German bands Nachlader and Rich & Kool. The Japanese DJs Daisuke Pak and Kengo Morioka call themselves ODD. If you put them on top of each other they are just about three meters tall. The duo regularly tours Eastern Europe with their minimal techno sound. “Bokura Wa Shonen Tantei-Dan” is about teenage junior-detectives and was adapted from a Japanese TV series in the seventies.

Irishman Jason Murtagh bumped into TORPEDO BOYZ on a golf court near Dublin a couple of years ago. It took about six pints to get him to sing. Rumour has it that he disappeared to Stockholm after the sessions for „Gimme A Bassline!“ were completed.

AK47 took his name from his favourite toy. The big brother of the reknowned “Armenian Rubberman” lives in Moscow and Berlin, as long as he’s not hunting for French gypsy music on record fairs around the globe. Last but not least there’s a real Brasilian on “Headache Music”. Gil Goes (“Jamais Imaginei”) grew up as a neighbour of football hero Rivaldo, but couldn’t stand him at all. Gil’s father once played in Marcos Valle’s band.

Trainspotters watch out! Fort Knox Five, the ultra-cool producer team from Washington, recently remixed “Are You Talking To Me ???”. The new single “Start Being Nicer” has been given a reworking by Pet and The Killergroove Formula. If that’s not real “Headache Music”, we don’t know else ...